Great War Wall of Remembrance Opens at the Folk Park 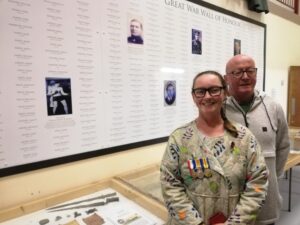 On Remembrance Day, 11th November, we were honoured to welcome historian Simone Hickey to officially open our Great War Wall of Honour at the Folk Park.

Since February 2014, Simone has been putting together a list of all those from Sligo who died in The Great War. This has ensured the more than 600 Sligo-born military personnel and 7 Sligo civilians who died in the conflict have been accurately represented.

Another version of the wall, originally at Sligo Cathedral was previously at the Folk Park. Erected in 2014, this marked the centenary since the beginning of World War I but the list has been constantly updated since then.

Simone Hickey said that at the time of World War I families were not given a proper opportunity to mourn family members they had lost. The conflict coincided with the fight for independence and fighting on behalf of the British Crown was regarded as something to be ashamed of. 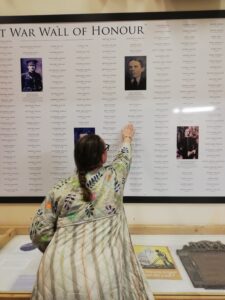 As we have been so thrilled with the response, we’re offering a special rate for those who would like to see Simone Hickey’s work in person.

Normally we charge €8 per adult to do the self-guided audio tour of all 12 exhibitions at the Folk Park. However, until the end of the year, if you would just like to see the Military Exhibition (featuring the Wall of Honour and Constance Markievicz’ uniform among many wonderful, authentic items) you can pay just €2 for this part of the audio tour. As this special offer isn’t available online, please call us to book your spot on 00 353 71 916 5001